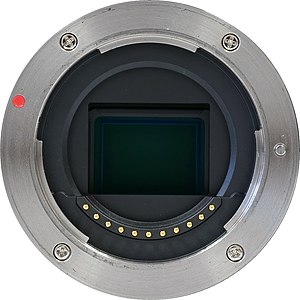 Owing to the cooperative nature of the Micro Four Thirds standard, lenses for the system have been produced by a number of companies. While third-party lens producers such as Sigma often produce lenses for another company's cameras without the official blessing of the camera supplier and therefore must design its equipment through reverse-engineering, in the case of Micro Four Thirds these companies can join the alliance, as Sigma has, which gives them access to all the design specifications and technologies as laid out in the standard. All Micro Four Thirds lenses are compatible with other Micro Four Thirds system bodies, with only very few exceptions.

The lenses in this range are 'consumer grade' zooms. Many are not weather-sealed and have lower build quality and smaller maximum apertures than their higher tier counterparts, but are more compact and lighter weight. Standard zoom lenses have decreasing maximum apertures as the focal length increases. This includes most of the kit lenses as well as the most affordable options.

Of increased construction standard and better optical quality over their lower-tier counterparts, these lenses incorporate all that the lower tiers offer while adding features and performance. The zoom lenses in this line offer constant aperture over their zoom range while the prime lenses feature wider maximum apertures than those in the Premium line.

Several Olympus M43 lenses have been discontinued. In most cases this is because a new version has been introduced which has a new optical design, some updated features (e.g. weather sealing) or just an cosmetic refresh. The only Olympus lens that has been discontinued without a direct replacement is the M.Zuiko Digital 17mm f/2.8 pancake, which was one of the very first M.Zuiko lenses released.

Olympus produces a few lenses which they don't give the M.Zuiko name. These are very simple, basic designs typically sold at very low price points. Olympus categorizes these as accessories rather than lenses in their promotional materials.

As a founding partner in the Micro Four Thirds consortium, Panasonic has produced a wide array of lenses for the system under its Lumix brand.

Panasonic brands their "consumer" lenses for the system under the "Lumix G" label. Their higher-end offerings are designed in partnership with Leica and sold under the "Leica DG" brand.

The Lumix G line from Panasonic includes their more affordable, consumer-focused lenses. These include both zoom and prime offerings.

As of 2021[update] the Lumix G zooms range from a 7–14mm ultrawide to 100–300mm super-telephoto. This group also includes most of the kit zooms which are packaged for sale with cameras.

The Lumix G prime lenses cover a good range of wide to short-telephoto focal lengths reaching from an 8mm fisheye to a 42.5mm lens that's great for capturing portaits.

Several Lumix G lenses have been discontinued since the series was established. As with the Olympus lenses, the bulk of these consist of lenses which were replaced by direct upgrades, either to offer optical improvements, new features, or simply to refresh the aesthetics.

The sole outlier that didn't have a roughly equivalent replacement is the unique 3D lens. This specialty lenses worked only with a handful of specific camera models rather than the entire range as with almost all of the other lenses in the system. The other limitation was that the effect was best viewed on Panasonic 3D televisions, and the passing of the 3D TV fad saw the eventual elimination of that category.

Panasonic Leica DG lenses are the product of a partnership between Panasonic and the venerated German optics firm Leica. These lenses are developed for optimal performance and typically cost more than Panasonic's consumer-focused Lumix G brand.

Zoom lenses from the DG line range from the ultra-wide angle to normal 8–18mm lens to a super-telephoto 100–400mm option.

Single focal length lenses from the Panasonic/ Leica partnership cover a wide range of focal lengths ranging from 12mm all the way up to 200mm.

Only a single Leica DG offering has been discontinued (as of 2021[update]), the original Summilux 25mm. This lens was replaced by a new version which add weather sealing. 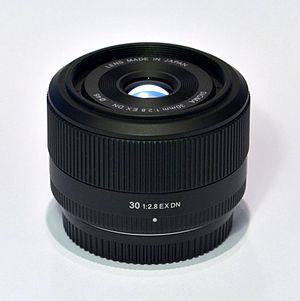 The lenses produced by Sigma for the Micro Four Thirds system are essentially adaptations of lenses Sigma produced also for APS-C or 35mm formats.

As of 2021[update] Tamron has produced only a single lens for the M43 system.

The following list is a partial list of a few of the hundreds of manual focus lenses that have been made available to fit M43 cameras:

The distance between film plane and lens flange of the Micro Four Thirds system is smaller than that of most other systems. This allows enterprising people to adapt older SLR and video lenses for these cameras.

All of the above lenses may be attached and should focus manually to infinity.

Because 35mm lenses have a larger image circle — and the previously mentioned smaller register distance — it is possible to make an optical adapter that gathers light from more of the image circle, and which then reduces that image circle to better fit the Micro Four Thirds image circle. This results in making the lens both wider and brighter, typically by a factor of 0.707 (the square root of 1/2), although some focal reducing adapters provide other ratios.

Because more of the image circle is used, and because the wider angle "pushes away" typical lens defects, a quality focal reducer on a quality lens can actually improve the image quality of the lens.[14]