The Micro Four Thirds system (abbreviated variously as M43, M4/3, μ4/3 or MFT) is a standard introduced in 2008, for the design and development of mirrorless interchangeable lens digital cameras and lenses. The system was jointly developed by Olympus and Panasonic, but the Micro Four Thirds alliance has since grown to include over 40 companies. 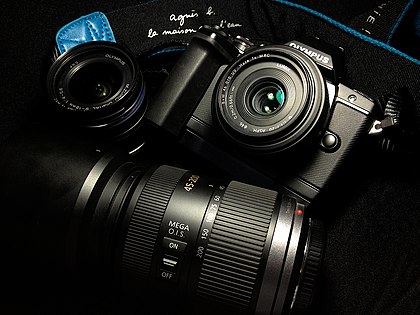 The Micro Four Thirds (M43) standard was announced by Olympus and Panasonic on August 5, 2008.[1]

Olympus's first M43 offering, the Olympus PEN E-P1 was introduced a few months after the GH-1, in June of 2009. The E-P1 offered a different styling take which eliminated the viewfinder in favor of a more rangefinder-esque design, somewhat similar to the overall ergonomics offered by the company's existing compact camera line.[4]

M43 shares the same sensor size as Four Thirds. But the mirrorless design eliminates the mirror box and optical viewfinder allowing a shorter flange focal distance, which is the distance from the lens mount and the sensor (see image at right) — the M43 flange focal distance is 20mm, compared to Four Thirds' 40mm. The M43 bayonet lens mount also has a throat size which is 6mm smaller in diameter than that of Four Thirds. Both of these design choices allow for more compact bodies and lenses. The third major change is that the M43 lens mount spec has eleven electrical contacts, two more than the earlier system. Adapters are available to mount Four Thirds lenses on M43 cameras with full electronic control, including autofocus.[6]

One major tenet of the Four Thirds design philosophy that carries over to M43 is that lenses should be as close to telecentric as feasible. That is, the light from the lens should reach the sensor at as close to a right angle as possible. This concept of enhancing the linearity of light hitting the sensor minimizes ghosting, flaring, vignetting, chromatic aberration and/or loss of sharpness that can sometimes be caused by light encountering the sensor photocell at an acute angle.[7] While Four Thirds and M43 lenses are not technically telecentric, this philosophy ensures that they are closer to the ideal than are lenses developed for most other systems, although some more recent mirrorless systems from Canon and Nikon appear to adopt this goal as well.[8]

The name 'Four Thirds' is derived from the fact that the size of the image sensor is categorized as 4⁄3 inch.[10][11] The aspect ratio of the sensor, meaning the ratio of the width of the sensor to its height, is 4:3. This differentiates the specification from other digital systems including so-called "full frame" and APS-C sized sensors from brands such as Nikon, Canon, Sony, Fujifilm or Pentax) as well as from 35mm film, all of which produce an image with an aspect ratio of 3:2 which was inherited from analog TV standards.

The diagonal length of the 4/3rds sensor is roughly half that of a 35mm film negative.

The ratio of the image size, combined with the smaller sensor means that cameras with a Four Thirds sensor have a 'crop factor' of exactly 2x — that is to say, a 50mm lens for a 35mm film or a so-called "full frame" digital camera adapted to use on a M43 body gives the equivalent field of view to a 100mm lens on a "full frame" camera. The term "crop factor" is somewhat misleading as the sensor does not crop the image at all — it simply utilises a smaller section of the lens. In essence only the portion of light entering the lens that actually hits the sensor is altered, meaning the field of view is smaller, and thereby effectively doubling the focal length of the lens.

It is important to note that neither the light gathering ability of the lens, nor any of its traits are actually altered: a 50mm f/2 lens on a M43 camera has the same f-stop and depth of field as a similar on a 35mm camera, but the 4/3rds sensor records only the portion of the image (i.e. the field of view) that would be captured by a 100mm lens on the larger sensor. As a general rule of thumb the depth of field of a lens is halved as its focal length is doubled (if the aperture remains constant). The end result is therefore that a M43 camera has twice the depth of field as a 35mm camera with a lens covering the same field of view.

As a further example of the above, let us compare cameras using M43, APS-C and "full frame" sensors in a given situation with the goal of producing an image with a similar angle of view, depth of field, diffraction limitation and motion blur from the same vantage point:

This allows a photographer to either use a lens at a lower F-stop (for faster shutter speeds) or shoot at a lower ISO (for lower noise in the final image) than would be possible in 35mm or APS-C format. This field of view/depth of field effect was a primary consideration in the design of the Four-Thirds system.[7]

Live MOS is a brand name for Four Thirds image sensors. This technology debuted in 2006 with the Four Thirds Olympus E-330, Panasonic Lumix DMC-L1 and Leica Digilux 3.[12] As the name implies it offers a live view using a Metal Oxide Semiconductor (MOS) sensor. Specifically, the Live MOS sensor is a type of NMOS device.

Olympus claimed the new sensor could achieve similar image quality to CCD-based sensors while also providing the energy-saving attributes of a CMOS device.[12] In order to combat the disadvantage of CMOS devices when it comes to image noise, the Live MOS chip integrates noise-reduction technology.

The principles outlined above in the design of the Four Thirds sensor also carry over into the lens designs for the system: with a crop (or magnification) factor of two, a telephoto lens for the M43 system with the same field of view that of a lens designed for 35mm can be half the size.

For example, a 150mm lens fitted to a M43 body produces the same field of view (and therefore effectively the same magnification) as a 300mm lens on a 35mm film (or "full frame" digital) camera. Not only does this mean M43 lenses can be significantly smaller than their "full frame" counterparts, it also means it is much easier and cheaper to produce lenses with good focal length to f-stop ratios.

Most M43 lenses are also nearly telecentric, meaning that no matter what angle the light enters the lens, the glass within the lens is designed to ensure the beams of light hit the sensor straight on. This design requirement is due to the nature of digital sensors: they are highly sensitive to the angle at which light hits them, with highly angled photons not being picked up by the sensor at all.

The diameter of the M43 lens mount is just under twice the diagonal of the imaging sensor, which also allows for improvements in lens design: with the lens focusing the image down to just over half the area of the mount throat before it hits the sensor, this allows the lenses to be brighter without sacrificing the size or weight advantages gained by the smaller sensor.

As of 2021[update], nearly seventy cameras models have been produced for the system. The two main Micro Four Thirds partners, Olympus and Panasonic, have created the bulk of these. The rest were produced by the likes of Kodak, JVC, Black Magic, DJI, Z Cam and Yi.